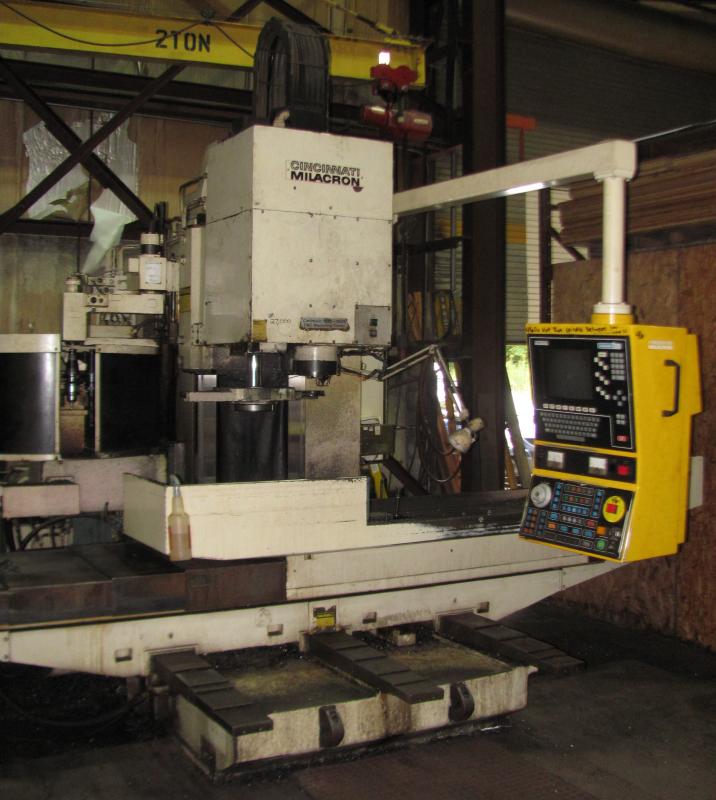 I’ve recently been helping out a local machine shop by troubleshooting and repairing some of their Cincinnati Milacron CNC machine tools. 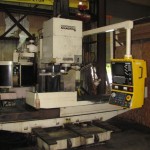 The shop has a selection of Cincinnati machines dating from the late 1980s, using a Acramatic 850 control system, which is quite obsolete. The control uses 8086 and 8087 processors! These chips were dated when I began my career in electronics… and that’s been a few years. At core these are solid, well built American machines, however. The mill above has about 5 feet of X travel, and over 2 feet on Y and Z. It weighs over 15 tons.

I like being back in a machine shop environment for a while. The shop is pretty good sized and handles some healthy parts. The 15VC is a mid-sized machine for them. Below is a modest casting they are machining; this is by no means the largest stuff they handle! 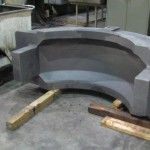 The main control cabinet is shown below. 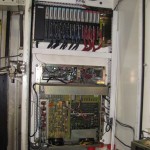 Main cabinet with PLC and Processor

The Acramatic 850 control consists of a pseudo-PLC rack (at top in photo above) which actually interfaces to the main processor board (they call this the NCP). Analog servo drives are interfaced via DACs on the SAM (Servo Amplitude Module), which also provides the resolver interfaces. Yes, these machines use resolvers rather than incremental encoders… and they are working fine after more than 3 decades. 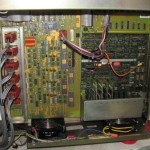 The NCP (the rearmost board) must be the largest single PCB I have ever handled. The thing must be nearly 4 square feet of PC board! And not a surface mount device in sight.

One of the things I’ve done is rebuilt several power supply racks. These racks contain a switching supply and a PowerOne linear supply, both of which need component replacements after 30+ years of operation. 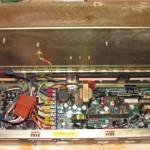 Power Supply Racks are getting tired

This machine is now up and running. I’d really like to upgrade this machine to a new control system, as the number of available Acramatic 850 components seem to be dwindling, and a lot of the individual components on the boards are obsolete.

The servo system is dated (a rather hideously crude Siemens 6RB2000 rack) driving brushed DC servos, but fairly solid. For a big machine like this, doing job-shop work, maximum servo performance isn’t critical, so retaining the existing motors and drives is fairly realistic.

I’ve been considering various upgrade options, all of which are PC-based. I am not a fan of Windoze (it causes enough problems on desktop computers!), so Linux is a distinct possibility.

Other machines I’ve worked on for them include: