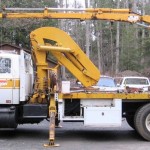 Over the winter of 2005 and 2006, I assembled a Hyrail (hi-rail) truck with two knuckle boom cranes as a volunteer for a not-for-profit museum.

As a museum director, I was concerned about safety with an antique Burro rail crane we owned. The machine was temperamental, inconvenient, and significantly worn out. After multiple near misses with volunteer operators, I suggested we replace it with something more modern and flexible. 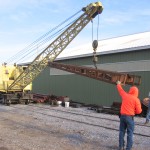 I searched some months to replace the crane within the museum’s limited budget. Ultimately I negotiated a reduced price on a used mechanic’s truck from Curry Supply. As purchased, the truck had one IMT Crane knuckle boom, an air compressor, and various tool racks on a GMC Brigadier chassis with the venerable 6-71 Detroit Diesel engine. It would be up to me to make it Hyrail. 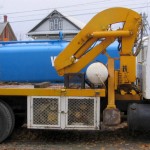 Boom truck at time of purchase with one crane

I arranged donation of used Fairmont Hyrail gear suitable for the truck. The gear had been outside for years and was in poor shape. With the help of hydraulics shops including Central Hydraulics, I repaired hydraulic cylinders, installed new control valves and hoses, and overhauled mechanicals of the Hyrail. 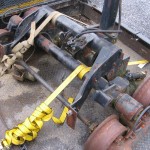 I considerably modified the front of the truck, extending the truck frame and revising the crossbrace that supports the radiator so there was space to mount the front rail gear. 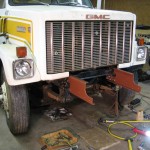 As work progressed, it became evident it would be nice to have a lighter crane boom with more reach. Searching again, I found a newer and smaller IMT Crane model 425 boom with 35 foot reach on a junked Conrail truck. I again negotiated a reduced price, and a friend with a rollback helped me move it. 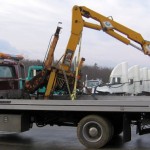 I did all fabrication to install the second crane, using the first crane to unload and position it. I reverse engineered the hydraulic controls and integrated them with truck hydraulics. I located and installed an affordable proportional valve controller (PWM solenoid driver) so the wired remote control has “speed control” for fine motion. And I did considerable mechanical repairs on the crane, needed from sitting outside for years full of debris. 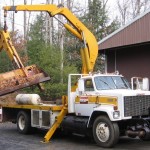 When the project was finished, I had over 400 hours of my time in it. Only a few times did other volunteers assist me with the massive task. As a final touch, I got a local construction contractor to haul the machine to the museum at no charge, as we did not license it for road use.

At the museum, the truck has proved a flexible and powerful machine for many tasks and is used regularly. The hydraulic motions—especially the wired remote—are much more user friendly than the aged Burro crane it replaced. 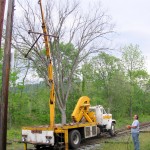