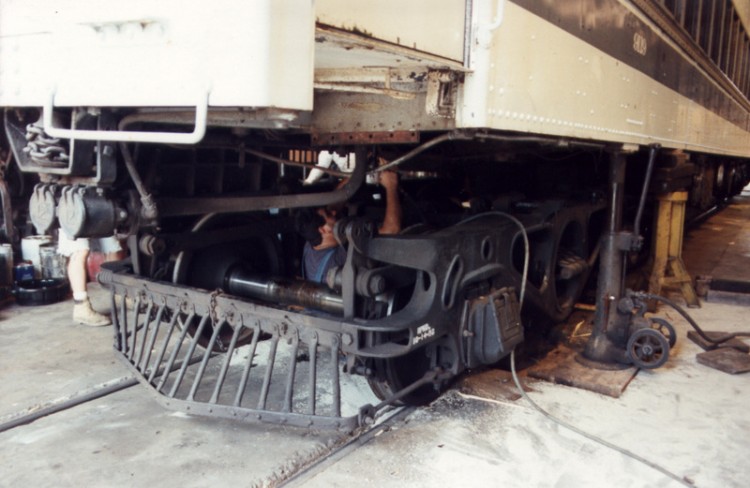 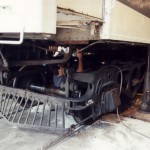 In late 1997 I led a project for a volunteer group to work on seven historic railroad passenger cars so they could be used on planned public excursions.

The historic railcars, built by Bethlehem Shipbuilding in 1929 and 1930, still retained electric propulsion motors, although we towed them with diesel locomotives. Federal Railway Administration inspectors determined we could no longer use the cars with motors in place. Two motors, each weighing about 7000 pounds, had to be removed from under each car before they could be used the next spring.

I discussed the project with several contractors. Even at their best discounted rates we did not have funds to pay for their services. I therefore proposed we do the work ourselves with volunteers, and use proceeds from scrap materials for the museum’s benefit.

Using a borrowed shop building and air jacks, we raised one end of each car and rolled the truck (wheel and axle assembly) with motors from underneath. As we stripped parts in preparation, a local towing company dispatched a truck to do the heavy lifting part, which took little time. By using tow trucks as needed instead of a rented crane, we saved a substantial amount on equipment rental and operator wages.

Air jack lifts one side of railroad car 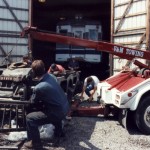 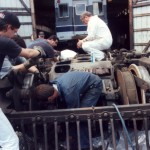 Once all the cars were stripped of motors, we hired a larger tow truck for a couple hours to load scrap into bathtub dump trailers. We sent about 100,000 pounds of steel and copper motor scrap off to China, yielding a substantial income for the museum. We replaced the steps on the cars, and they were used on passenger excursions in 1998.