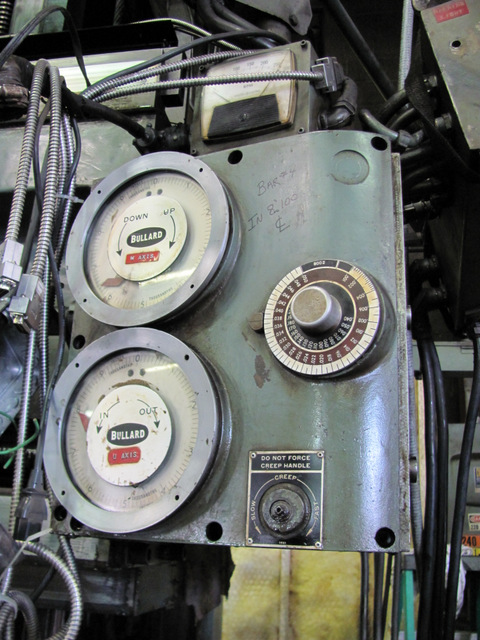 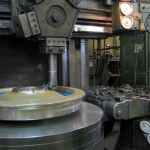 In September of 2010 and again in May of 2012, I repaired the feed gearbox of a 56 inch Bullard Vertical Turret Lathe (VTL).  Its electrically-controlled feed gearboxes are probably the most complex machines I have ever serviced.

This “Dyn-Au-Tape” model was built as a tape-controlled (NC) machine, right before the transition to early CNC. It came after the “Dyn-Au-Trol” models. The gearboxes combine planetary gearing with hydraulic pumps and motors, solenoid valves, electric gearmotors, cams, switches, myriad linkages, countless gears and bearings, and multi-disk clutches, all in a tightly-packed enclosure mostly filled with slippery hydraulic oil. 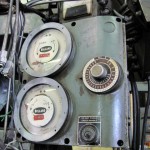 After the better part of a day removing wiring and electrical components, I could finally remove the gearbox cover. 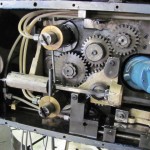 Front half of feed gearbox 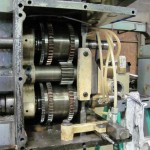 Removing a considerable number of gears and bearings, and disconnecting the lead screws, gives access to the clutches. 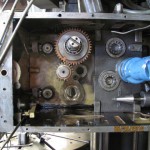 This gearbox is a crazy ‘Rube Goldberg’ arrangement of levers and cams and rollers and ramps and gears and plungers and sprockets and… sigh. And to think, all these hundreds of parts were made on manual or tape NC machines! 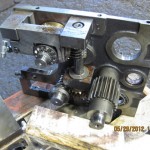 Another view of parts

Replacement ‘running take out’ clutches were about $1800 each, about what a surplus servo drive would cost on ebay. 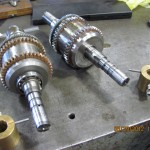 One failure was a worn “distributor bushing” which puts oil to the clutch shaft to operate the clutch pistons. When o-ring seals fail or the bushing wears enough, there is insufficient clutch pressure to feed the machine. 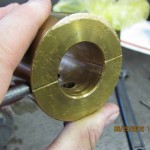 In the second failure, a thrust bearing on the lead screw failed, although I found the clutch needed to be replaced anyway.

We also had frequent failures of Vickers D1L solenoid valves on this machine. Those valves are long obsolete and finding parts is very difficult. I devised a clever way to adapt modern solenoid valves, so Contact me if you have that problem. Unfortunately I don’t have any pictures of my adapters.

I would really like to have simply replaced these nightmarish gearboxes with servomotors. I did sizing calculations and it was quite feasible. Much of the conversion cost could be recouped selling the old gearbox cores to the company providing replacement parts. Conversion would also have moved the machine significantly closer to partial or full CNC conversion.