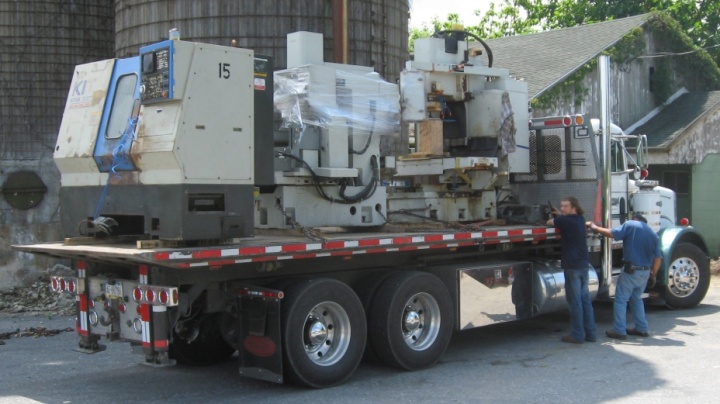 After a day securing the machines for transport and other preparation, my hauler showed up with their 53 foot Landoll trailer and announced they couldn’t get into the site. I’d warned them that it was going to be difficult–and they assured me it would be fine. Until it wasn’t.

Thankfully I “knew a guy” with a 53,000# rollback who was only 20 minutes away. He showed up and saved the day, getting the machines out of the cramped and steep site and to his relative’s farm for transloading.

The whole day really ended up a fairly fine fiasco. Among other things, I had my first experience with heat exhaustion. It wasn’t that hot, but after several previous days of torrential rain the humidity was just insane.

When all was done I did end up with a lathe, a VMC, and a wire EDM, with minimal investment beyond several peoples’ labor and sweat.

Lesson? Don’t leave the world with 10 tons of machinery in your backyard shed without a removal plan.